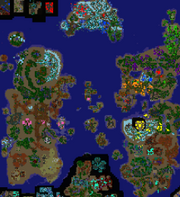 This is a collaborative community website centered around Azeroth Wars: Legacy Reborn, a Warcraft III custom map set primarily during the events of Warcraft III and its expansion The Frozen Throne; the map also features lore and events from the MMORPG World of Warcraft and its first two expansions, The Burning Crusade and Wrath of the Lich King. Through gameplay you can experience the story in a nonlinear fashion (as it is a semi sandbox game), which gives players the freedom to do what they want. In this custom map players will control a variety of notable factions, races and characters from the Warcraft universe. AWLR has noticeable role-playing elements in its core which distinguishes it from a regular RTS. In fact, authors claim, that AWLR actually represents original genre, called Role Playing Grand Strategy.

The first version of the game, called Azeroth Wars Strategy was created in 2006, by Augur. This later spawned several spin offs. Azeroth Wars: Legacy Reborn, the concept's most played successor, was created by Avrion, Railen and EagleMan, members of Clan QUAM. After a period in which EagleMan was the sole active author, he turned over the map to new editors from Clan LHoT: Thurr and Bhaal Spawn. After them, work was continued by SteakOnSpear, Joffrey, Dave_Rolf and Djisa. Finally, in late 2014 it ended up in hands of current development team: Rhemar, Talinn and Augur.

For comments, questions and discussions please visit the official Azeroth Wars: Legacy Reborn forums at Diplomunion.com. If you want to contact the current editing team Diplomunion is the quickest and best way to do so.

It can be downloaded from Epic War

Version changelog can be seen here.

Gameplay is in many ways similar to the melee games of Warcraft III - You will control varied races, heroes and units and are required to destory your enemies, but it can also be called Role Playing Grand Strategy.

Team 1: The Forces of Evil

Tiers are ordered in three pairs, from wich you can only chose one at a time, meaning that from six options you can only get three because, once researched, the other Tiers will become unavailable for research. They can bring from upgrades to Demi-Heroes having special wide-ranging bonuses, choose carefully.